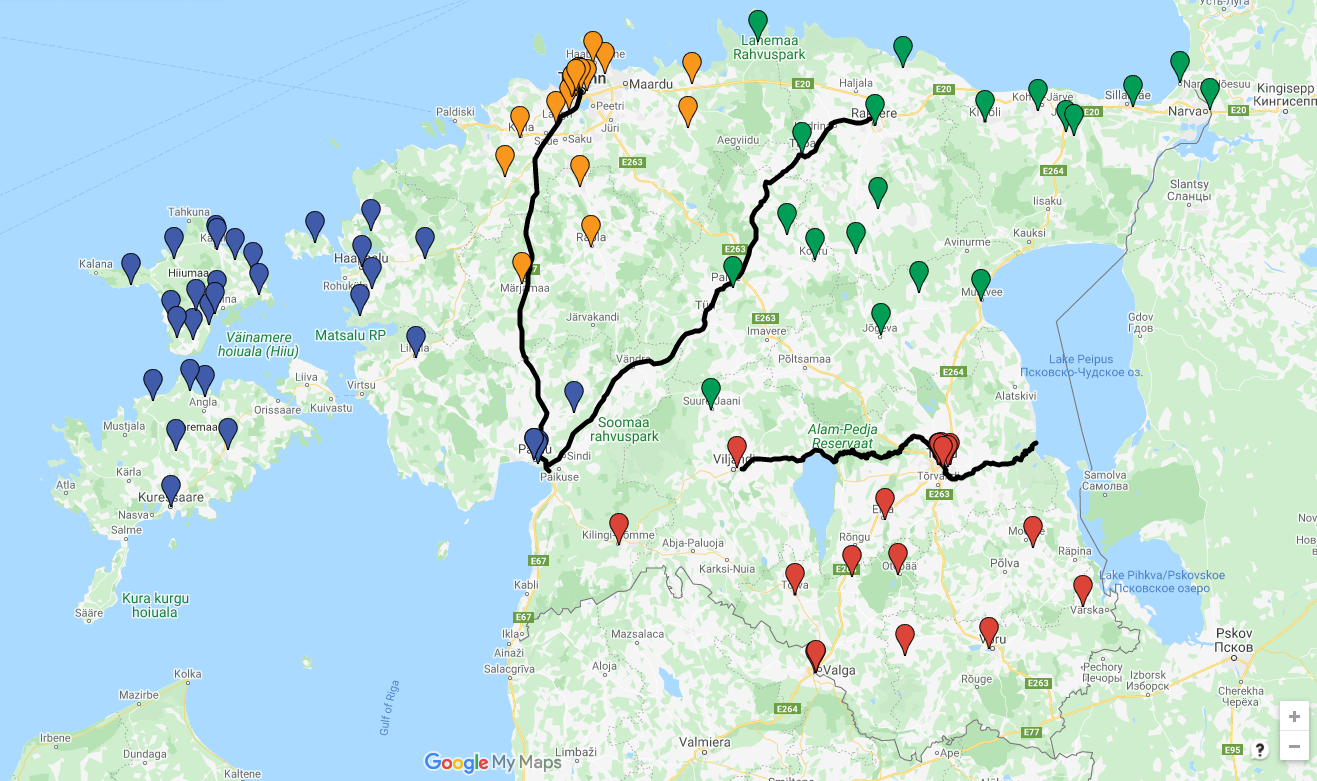 I’ve had a number of interesting conversations recently on the question of how to divide up the country of Estonia into regions of churches. As the member of a local congregation, particularly in a Christendom setting like the UK or North America with church buildings saturating the landscape, the idea of grouping congregations may seem like a purely administrative question. But in Estonia and much of continental Europe, our task is the re-evangelization of a post-Christendom and often highly secular culture. In such a setting there may be large geographical distances between active congregations. This distance is not just physical and administrative. It also has a profound effect on partnership, fellowship and missional effectiveness.

For these purposes, the EEKB Church Union (of which the Rapla Church is a member) has grouped its various churches into 9 regions which you can see color coded in the somewhat dated map below (grey dots are unregistered mission outposts). The benefit of the system at present is that the regions are relatively manageable in terms of size, the churches in each region are geographically accessible to one another, and the regions reflect existing sub-cultures.

But the current system has some problems, for example:

One recent proposal would be to redraw the administrative map into 4 geographic regions each represented by a major city and its surrounding rural churches. This would centralize administration and perhaps offer a better reflection of the theological diversity that exists across our union. But how would we determine the borders between those regions?

Since travel time between churches seems to be one good indicator of their tendency to partner with one another, I used travel times and network techniques to create a distance network graph. The churches in this network are connected if they are less than 1.5 hours driving time from each other. I figure this is about the maximum driving time somebody is willing to endure for a meeting with other churches, especially if that time is doubled for the return trip. The network graph below shows the results.

This breakdown successfully reduces the number of regions from 9 to 5 based on 1.5 hour drive time. In reality the pink cluster (islands Saaremaa and Hiiumaa) could be grouped with three nodes from the green cluster (KVORM, KRIDA, KHAAP) which represent the islands’ mainland ferry terminals and added to the nodes in the blue cluster located in the city of Pärnu which is the closest major city and shares the islands’ maritime micro-culture. This would give us a good breakdown into 4 regions with a more or less equal number of churches and a good distribution of congregation sizes, contexts (urban/rural), and theological traditions.

The maritime micro-culture is only one of a number of distinct micro-cultures in Estonia. These micro-cultures help to bond congregations with similar heritage and mindset. We could consider these micro-cultural differences in the same way we have treated geographical distance: the greater the distance between cultures, the less likely congregations are to form a significant partnership. I discovered a helpful and informative article from Heiki Valk that gives a thorough argument for how these micro-cultures break down geographically (his interest is the distribution of archeological cultic sites). Valk argues for a distinction between maritime and inland cultures reflected in livelihood, dialect and mentality which generally breaks down into a north/south division. Valk further distinguishes the Western coast and Northern coast which corresponds well with our Union’s historical tie to the West Coast revivals (see Toivo Pilli and Jaanus Plaat for detailed research on the revivals).

Each of these larger regions can be further broken down into 3 or 4 micro-cultures which you can see in Valk’s map above. But for the purposes of this discussion and in keeping with the 4 region proposal, I would only suggest a split of the Northern Coastal region into NW (Harju) and NE (Viru) regions, each based around a hub city (Tallinn and Rakvere).

The final piece is to simply draw the borders. Based on all the breakdowns I’ve listed above, I would suggest the following regional borders delineated by the letter “K”:

Visually, the map would look something like this (with a few amendments for balance).

The question remains: what would this redistribution actually accomplish? And would it solve the problems with the current system or simply make more? In my next post – “Dividing For Multiplication” – I’ll pick up the discussion on those points and argue for a bit of a different approach.